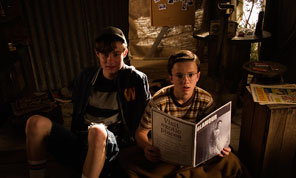 Tagline: Have you ever heard the legend of the unmarked grave?

Synopsis: Gravediggers is a kids’ adventure tale set in the 1950’s. It tells the story of four childhood friends who set out to find a mysterious unmarked grave in a nearby cemetery. According to local legend, buried beneath this grave is a priceless jewel. But as the boys will discover, that’s not all that waits for them six feet below…