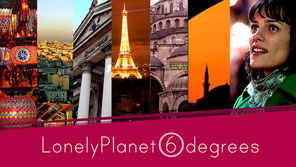 Presenter: Asha Gill
Playful, sassy, streetsmart and unexpected, Lonely Planet Six Degrees connects its viewers to what makes each city special – the people that live in it.

Avoiding the well-known tourist attractions, each Lonely Planet Six Degrees journey begins with a traveller arriving in a new city with just a single point of contact. From this initial encounter a chain of connectivity is forged across the city as one person leads to another and another another.

Meeting six strangers in sixty minutes, our travellers experience the city through the eyes of some of its most colourful and clued-in residents, proving that it’s the people, the lives they lead, and the stories they tell that give a city its soul, rather than just the bricks and mortar.